At least once a day I intend to dash off a blog post because at least once a day something that merits sharing happens. The trouble is that things never seem to settle down long enough to write about it. It’s funny, really. I once worried whether life would be too quiet living in a little village that is 2 1/2 hours by car to the only city in this province, Halifax, with a population of less than 400,000. (Does that even qualify as a city?)

But I’m here to tell you that big stuff happens right here in Bear River. Maybe it really IS the centre of the universe. 😉

Take yesterday for instance. I was in the garden planting dahlias, adjusting straw, and digging holes for the climbing beans, planted from saved seeds. It was a glorious day for gardening because the wind blew away every last biting black-fly. The only blot on the horizon is that the garden needs rain again, but the straw mulch is keeping the soil damp. Larry was hammering in the studio and working on a design for a set of brass and copper goblets.

Suddenly there was a phone call and a flurry of panic and tidying up because a German TV Film Crew was arriving with Rob Buckland who carries our work at his Flight of Fancy store. The filmmaker Holger Riedel and assistant Lars Pfeiffer are making a 5 part series about the circumnavigation of the globe by modern-day explorer Arved Fuchs. In case you thought that explorers only existed prior to the 20th century, apparently one is alive and well and living in Germany when he’s not trekking to the Arctic. To support the story, Holger is filming vignettes about the countries and areas that Fuchs will pass through.

What is rather astounding for me about this is the power of a blog and of the internet. Holger Riedel searched the internet for Bear River artists and found Rob through the  blog that I developed for our studio tour group.  Although we only update it annually, it connected us to Holger’s project.

They filmed Rob talking to me about my work and we had to do 3 takes of walking into the studio and saying ‘hi’. You’re not supposed to look at the camera that’s inches from your face. They filmed me painting and it was really hard for me to concentrate! Here’s the little 8″ x 8″ acrylic canvas I painted. I think it looks like a camera-shy flower!

I thought that Larry did a great job at describing his work and his processes and I hope this Fuchs fellow makes haste on his world travels so that we can see the resulting Nova Scotia segment streamed live on the internet a week after it airs on German TV. It will be in German, but I’ll let you know when it airs. We might wind up on the cutting room floor, but for sure there will be some beautiful shots of Bear River.

After they left we walked around the garden watching the birds flit from tree to tree. And it didn’t even surprise us to see a fire truck at the top of the driveway, filling up a neighbour’s new swimming pool. After all, big stuff happens here all the time.

This site uses Akismet to reduce spam. Learn how your comment data is processed. 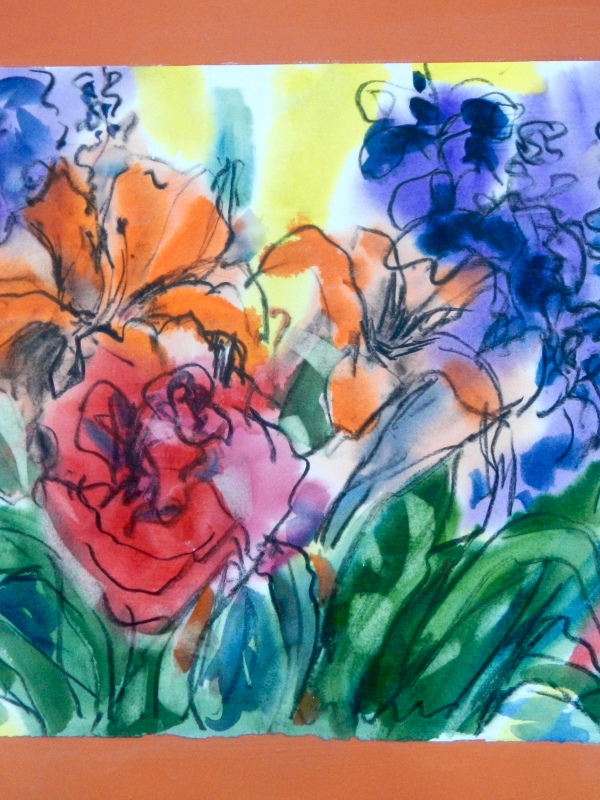 I paint with love of nature and its colours, textures and beauty in rural Bear River, Nova Scotia, Canada.

This oil painting was inspired by a sketch of fall trees growing along the side of the road, across the street from the Oakdene Centre in Bear River.
The update. Oil pastel of the Bear River Baptist Church.
I started this painting years ago and am pleased with the results. You can see her up close on my website https://floradoehler.ca/recent-paintings/ #floralpainting #artistinnovascotia
“Courage, my Love” 30” x 30”. My newest and favourite painting. 😄 #acrylicpainting #art #tulips #floralart #tulippainting
Courage my Love, 30” x 30” My newest acrylic painting. #acrylicpainting #novascotiaartist
What I brought home from Annapolis Royal yesterday. I LOVE IT. This plate may have to be part of a painting! Thank you Deb @luckyrabbitandco ❤️

Flora on the Web

Let me share posts and painting news with you!